THE JELLING DRAGON IS NOW THE VIKING DRAGON! Most of our products have now moved to thevikingdragon.com - Only Viking weapons are still available on this site. Use the menus below to access The Viking Dragon pages.
Skip to content

Many of our Viking jewelry pieces & Viking belt fittings are made using the ancient art of lost wax casting, as per the originals. The origins of the lost wax process are shrouded in antiquity, but it has been used for thousands of years to produce objects in metal which could not be produced any other way, due to the complexity of their form. It permits anything that can be modelled in wax to be faithfully transmuted into metal, and is still used today for certain industrial parts, dental restorations, fine jewelry, and sculptures.

The pictures below show the artist Alban Depper at work, taking you through the steps of designing, carving, casting & finishing one of our popular Viking pendants (AD134 – Loki Pendant). While wax patterns were originally modelled by hand, and this can still be done, it is now possible to cast wax into molds as well, so that multiple copies may be made even though the wax pattern is lost in the process. Modern synthetic rubbers have been developed which capture very fine detail and can flex to release undercut areas of a model, greatly reducing the number of mold parts and the number of parting lines necessary, when compared to the earlier technique of using wet plaster molds. Waxes can be cast either solid or hollow, as the wax will coat the inside of a mold after it is filled and poured out. This process is repeated to build up the desired thickness of wax. The process is slightly different for jewelry and sculpture; the smaller quantities involved when making jewelry-sized pieces necessitate some adaptations to overcome the effects of surface tension, such as wax injection instead of simple pouring, and the use of a vacuum table or centrifugal casting machine to force metal into molds.

Alban is shaping & detailing to take the form of Loki / Volund.

After it is made and touched-up, the wax model is attached to a “pour-cup”, which is funnel-shaped to channel the metal into the mold from the outside, using “gates”or “sprues” made from rods of wax , and a venting system is made the same way to convey air and other gasses out of the mold when it is filled with hot metal. Once the model is set up with its gates and vents, it is surrounded with a material that will cover it smoothly when wet and withstand high temperatures when baked. In some places an ancient technique involving cow-dung and clay is still used; a very fine mixture is painted on to capture the detail, then coarser layers are added to build up a mold that can be handled, baked, and poured into. 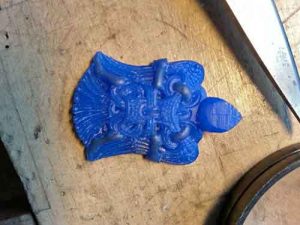 Alban is carving until the mold is almost finished of Loki / Volund.

A modern variation on this method is called “ceramic shell”; instead of the cow-dung and clay, a silicaceous slurry is used to cover the model by dipping and/or pouring. Special dry aggregate is then applied to the wet pattern, either by hand or by using a “fluidized bed”, which blows the dry particles around in a confined space, covering the wet areas until no more will adhere. The coated pattern is then left to dry a while and another layer of wet and dry material is applied. This is repeated, using coarser aggregate on the outermost layers, until a sufficient thickness has built up so the mold will hold together through the burn-out and pouring. 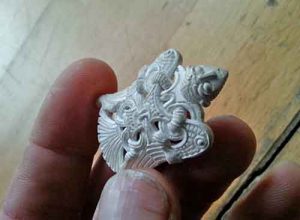 Once wax mold is complete Alban casts the pendant in raw silver.

The other method commonly used is called “investment” casting. The pattern is set up in much the same way as for ceramic shell, except that more venting is necessary due to the decreased porosity of the mold material, which is made using gypsum plaster (plaster of Paris) as a binder for sand, silica flour, or another refractory aggregate. There are many proprietary investment mixtures available, or one may choose to mix one’s own. The dry ingredients are mixed with water and poured into a container or “flask” surrounding the gated model, which is either waxed down to a board or attached to a commercially available rubber device which holds the pattern and flask. Jewelry flasks are generally placed in a vacuum chamber while this mixure is still fluid, where they are boiled at room temperature to remove air-bubbles clinging to the models. It is helpful to de-air the investment mixture before pouring it over the wax models, in order to reduce boiling-over when vacuuming. 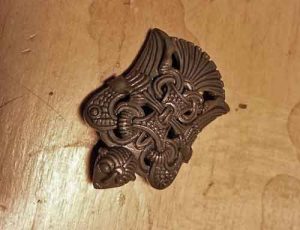 Alban then dips the Loki pendant in sulphur oxide which makes it dull & grey.

Once the plaster mixture has set hard, the flasks are placed in a kiln, slowly heated to between 1000 and 1250 degrees F, and held at that temperature until all wax residues have disappeared. The place where the wax was is now a void, hence the “lost wax” designation for this process. The metal is then melted and the molds are filled with liquid silver or whatever metal is being used. The flask is then allowed to cool, then the plaster mold is broken away, revealing the metal part, which faithfully reproduces every detail of the original wax, plus the gates and vents, which must be cut off. Silver, gold, aluminum, brass, or bronze may be used interchangably with this method. Special investment materials and melting equipment are necessary to deal with the higher temperatures of platinum, iron or stainless steel, but the process is much the same. Lower-melting metals such as tin, lead, and zinc may also be cast by this method, but there are other easier methods of casting them, so it is not often done. A variation on the lost-wax method is also used for casting objects in glass. 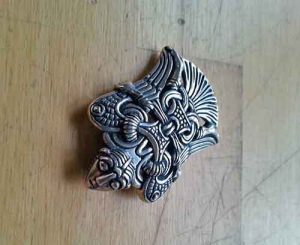 Alban polishes the pendant to give it a shiny outer surface and dark, contrasting recesses.